Down to the nine month mark! This past month has been more thinking and visualizing rather than actually making concrete decisions and plans. I mean, we have our venue and I got my dress, the rest is a cake-walk, right?

One thing I can happily say is that I haven’t been a bridezilla. 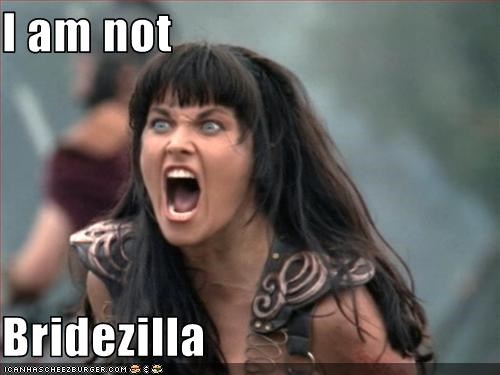 But seriously, if I’m being completely honest, I haven’t done any crazy complaining or stressing. I mean, I’ve watched some of those shows with crazy brides, and they totally stress me out. I can’t make it more than 2 minutes before I need to either change the channel or walk out of the room.

Like, these women are nuts. And it makes me question the sanity of the chump that asked them to spend the rest of their lives together. You really want to spend each and every day with her? And then there are her friends/bridesmaids whom she treats like total garbage. How have they not ended the friendship? Why did they agree to be in her wedding? And how on Earth do they restrain themselves from punching her in the face?!

But since I haven’t been stressing too much, I was so surprised when I had this crazy wedding dream/nightmare a couple weeks ago. I wrote about it here, so check out how strange it was.

I guess the one thing that hit home the most with that dream was the part about my mom not coming. I’ve been stressing about this the most and trying to figure out possible ways to get her down here. And then the guilt sets in.

Am I selfish for having my wedding down in Long Island instead of upstate? It has been less stressful planning it down here, and yet I feel like a horrible daughter in making it more difficult for my mom to come.

So I’ve been looking into finding resources in order to get mom down here:

Is there such a thing as renting a nursing home room or assisted living space for a night? That would be great!

On top of all this, the most important thing is keeping her stress level as low as possible. Stress exacerbates her condition, so we would need to make everything as easy on her as we could. This was actually one of the reasons we didn’t hold it upstate.

No matter what we plan, in the end, her MS will rule the day and decide how she feels. So even if we did hold it upstate, there’s always a chance that she may wake up that morning and feel like total garbage and be unable to attend anyways. See my dilemma?

On a lighter note, I’ve been designing our Save the Dates. In the wedding world, they call these STDs for short; I know, weird. Tom suggested skipping the STDs…wait…ahem, let’s just use Save the Dates. Come on Holliday, be mature.

You know you were thinking it too.

So Tom suggested just skipping Save the Dates and going straight to the invitations. Because we are having a wedding that has the potential for a lot of out-of-town guests, it would be a great idea to get a head count earlier than typical timelines suggest. This way we will have an idea of how many hotel rooms we might need to block, how many guests in general for ceremony and meal preparations, and how many would attend a separate reception if we held one upstate.

On top of that, we need to figure out a picture we both like to put on the Save the Dates and/or Invitations; we might need a few depending on what design we go with. Tom and I both like the Save the Date postcard idea, so if we do send STDs, we’ll probably go with something like this:

Except Tom isn’t a fan of the front picture. Which brings me to finding a photographer…

So an appointment had been made to meet with the photography company that works closely with our venue. Except someone (I won’t name names) slept through said appointment. Normally I think this would stress me (or anyone) out, but to be honest I’m not too impressed with that company’s portfolio.

Since they are based in Long Island, I wouldn’t have been able to attend the original appointment anyways, since I have grad school and work during the week. I’ve had my eye on two other photographers whose work I find so much better, but obviously they’re a bit pricier. I want the photos to be amazing, so I really don’t want to skimp and end up with crummy pictures just to save a few bucks. But I also don’t want to pay an arm and a leg, either.

So I made an appointment with one of the other photography companies I liked better, and I’m hoping that things will go well and we can decide to go with them. I’d also like to set up an engagement session with them. This way we can become comfortable with our photographer and we can all get an idea of what we want for the big day.

A couple weeks ago, we asked Tom’s dad to take a few pictures at the beach where we got engaged since he has a pretty nice camera. We have this running joke about not wanting super awkward pictures, so I mentioned poses like the ‘peering around a tree at each other’ pose. So we made a point to take a picture like that for fun, knowing that it is something we want to avoid with actual engagement pictures.

Even with our desire not to get awkward pictures, we got plenty of them that day. Not because we were super pose-y or cheesey, but because it was super windy and sunny at the beach. We wanted candid, we got candid. All I have to say is watch what you wish for. Outtakes might be posted on our wedding website, so wear a diaper for that experience.

Speaking of, Tom and I got to sit down and work on the website together last weekend. Tom did most of the work while I sat next to him and made my suggestions for overall look and functions. I’m always so amazed when I watch him do stuff with computers!

I’ve learned a lot along the way because he knows how to break things down and explain them to someone who is not completely technology illiterate but is nowhere near his level of knowledge. It was a nice bonding time for us and hopefully the site will be up soon.

On top of all that, I realized that this year will be the first time we get to spend Thanksgiving and Christmas together! Tomorrow, November 17, is the three year mark since we met, but we haven’t actually spent a major holiday together because of the whole 400-miles-between-us thing. We’ve talked over Skype on such days, but to actually be able to be with each other and share the joy that those days bring makes me really excited.

And (okay, let’s get cheesy for a second) kind of emotional. I mean, you have no idea how long I’ve waited to be able to spend special days – holidays, birthdays, even just going out on dates – with Tom. It’s crazy thinking about all the time we spent so far away, all the things we couldn’t do, all the experiences and memories we couldn’t share because of the distance between us.

Through the difficult times, the frustrations, the doubts, the short visits, the extreme loneliness following the short visits, and the inability to share all the good times without a screen between us. After 2 years of that, you can imagine how ecstatic I am knowing that Tom and I no longer have to endure these!

Therefore, since we have been justified by faith, we have peace with God through our Lord Jesus Christ. Through him we have also obtained access by faith into this grace in which we stand, and we rejoice in hope of the glory of God.  Not only that, but we rejoice in our sufferings, knowing that suffering produces endurance, and endurance produces character, and character produces hope, and hope does not put us to shame, because God’s love has been poured into our hearts through the Holy Spirit who has been given to us. –Romans 5: 1-5

Yes, we will still have frustrating times; I understand that marriage does not magically take away problems. If anything, problems will be brought to light or created as a married couple spending a lot of time together. But we’ll be able to work through them face to face. God seriously tested our relationship, and now we’re going to be joined in marriage! And I’m pumped!

So I told Tom the other day that we might just need to get one of those cheesy “Our First Christmas” ornaments for the tree this year! And we can put one of our awkward beach photos on it. Like this one:

All I know is there are plenty of awkward pictures to choose from. And all I can say is that we’re a couple of awkward people. And we must embrace it.

We rejoice in our shared awkwardness because it produces our endurance to deal with each other’s awkward characters. Let us hope that we can get pictures a little less awkward. If not, we have no shame because God loves us no matter what.