So for those of you who did not know, I have been living in the City That Never Sleeps.

Yes, Virginia, I have been living in New York City for two and a half months now…and I forgot how many people I didn’t tell. I guess maybe they thought I was just working as a substitute teacher and glamorous Walmart supervisor for these last few months. Others, well, either don’t care to know my whereabouts or thought I fell off the face of the earth?

I was actually accepted into Teachers College, Columbia University back in August last year, but coming in the fall was too soon to get everything prepared to leave home. That’s a whole other complicated story (AKA: my life), so maybe one day you’ll hear about it. I’ve always been told that my life would make a good book; I think I should get better at blogging first, then I’ll consider it. 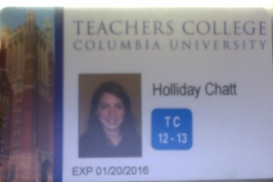 I applied for two schools: University at Buffalo and Teachers College. I had already been admitted into UB’s Math Education graduate program, and was planning on starting in the fall, so I had a fallback plan if TC didn’t accept me. I honestly didn’t think I had a chance of getting into TC; I mean, come on, it’s affiliated with Columbia! I’m just this small-town (though, technically, Batavia is a city) girl, I never received huge awards from school (high school or college), my grades were good but they could definitely find better people to take my place. It was quite a stressful summer waiting to hear from TC.

And then, on an August evening, I got an email from TC, directing me to the ‘decision’ page of my application. This was it; I mentally prepared myself to read, “We are sorry to inform you…” or something along those lines. So when I read, “We are happy to inform you…” I just about wet my pants. I think I screamed.

As excited as I was, the idea of moving in only a month was terrifying. Like I said, it wasn’t going to be as easy as students who move away to college freshman year and whose parents can take care of all the messy details: house, transportation, the actual moving process, etc. So I knew that if I accepted admittance into TC, I would be deferring to the spring semester to allow me more time to prepare myself mentally, physically, emotionally, and financially.

I only told a select few because I didn’t want to announce it publicly over Facebook that I was leaving town to go to NYC. There are multiple reasons, but one of the bigger ones was due to self-doubt and pride.

Okay, sure, I got accepted into this crazy awesome graduate school, but…What if I can’t hack it in the city? What if I come back after a semester because I hate it there? What if I fail: classes, living far from home, life in general?

And when I did tell people, I would make it seem like I was prepared to fail. Just in case I didn’t like it or ended up not doing well, I would be willing to come home without making a huge scene, reapplying to Walmart (that would make 5 stints there), and assume my old life back home.

If I hate it, no big deal, I’ll just come home.

It was definitely a defense mechanism, but, looking back, it was only defense from myself. Everyone I told was nothing but excited and supportive; we were all people living in a small city in western New York, so just thinking and talking about going to and living in a huge city like NY was thrilling. Absolutely everyone was pumped for me. Everyone but myself. Okay, it’s not that I wasn’t excited. The problem was that I was so excited I was afraid I would overlook the possibilities of failure and end up getting clotheslined by life.

Why do we do this to ourselves? If any of my friends came and told me they got accepted into a prestigious college and/or were moving somewhere, I would be ecstatic for them! A couple of my friends have done this actually (not for school but for jobs) and I couldn’t be happier. And I’m so glad they told me so that I can be excited for them and support them! But when it came to myself, I was so bent out of shape about the negative possibilities, doubting my ability to do well in school or survive a new city, that I wasn’t willing to share it with anyone but those I was closest to.

So to those of you whom I didn’t tell, I really apologize. I was afraid that if I told everyone and made this huge hype, it would blow up in my face and I would end up falling flat on my tush. Then I wouldn’t just be letting myself down, but I would feel as though I failed all the people I told, all the people that believed in me. I felt as though my failure would extinguish any fire in the hearts of those coming from a small city and wanting to explore living in a bigger city. If I couldn’t do it, I know it would discourage me, but would that also discourage others?

I’m glad to say that I love it here. These past two+ months have been exciting, challenging, eye-opening, and amazing. I’ve been wanting to write about my experiences here, but there was still such an uneasiness with letting people know and actually knowing myself whether I liked it here enough to stay. I plan on being here for the next year, and after that, who knows? Maybe I’ll love it enough to find a job here for a few years before I settle down and start a family; I don’t really want my future kids growing up in such a huge, overwhelming city. Or maybe I’ll find a job in another great city. Maybe a different country. Who knows? I do know, now that the cat is out of the bag, that I’m excited to write about anything that may come up.